Lecture: "The Root and the STEM: Borrowing Tools to Cultivate New Understandings of Power, Knowledge, Justice, Diversity and Inclusion in STEM" 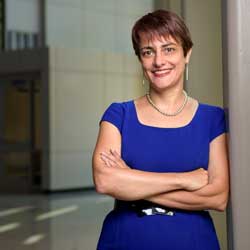 Dr. Riley is the author of two books, "Engineering and Social Justice" and “Engineering Thermodynamics and 21st Century Energy Problems,” both published by Morgan and Claypool. She served a two-year term as Deputy Editor of the Journal of Engineering Education (2012-2014), rotated through the leadership of the Liberal Education/Engineering and Society (LEES) Division of the American Society for Engineering Education (ASEE) (2007-2011), and currently serves on the ASEE Diversity Committee. She is the recipient of the 2016 Alfred N. Goldsmith Award from the IEEE Professional Communications Society, the 2012 Sterling Olmsted Award from ASEE, the 2010 Educator of the Year award from the National Organization of Gay and Lesbian Scientists and Technical Professionals (NOGLSTP), and the 2006 Benjamin Dasher Award from Frontiers in Education. Riley earned a B.S.E. in chemical engineering from Princeton University and a Ph.D. from Carnegie Mellon University in Engineering and Public Policy. She is a fellow of the American Society for Engineering Education.