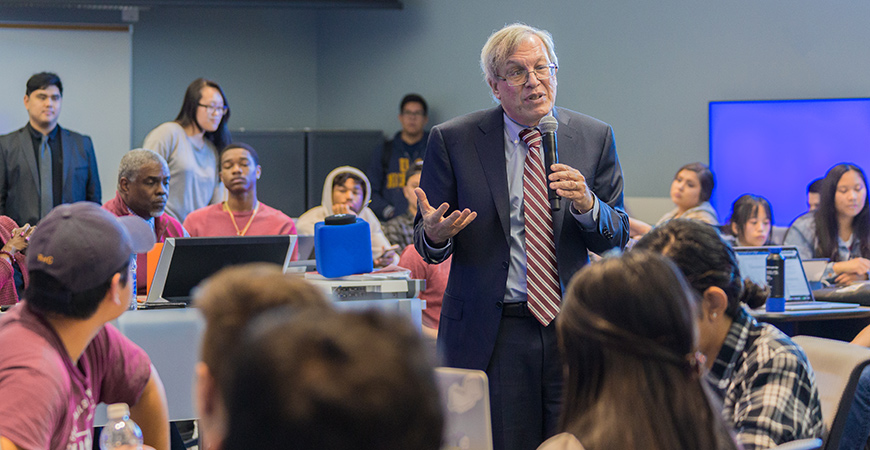 People on college campuses hold a wide range of views, and the First Amendment gives everyone the right to express their opinions. But restricting speech at a public institution — even when what’s said is unpopular, offensive or even hateful — is against the law.

Erwin Chemerinsky, dean of the UC Berkeley School of Law, shared that and other messages with students, faculty, staff and administrators at UC Merced this week as part of the Chancellor’s Dialogue on Diversity and Interdisciplinarity lecture series.

“All ideas and views can be expressed on college campuses,” Chemerinsky said. “The First Amendment applies to government. The government can never suppress, create liability or punish people based on their views or ideas. As we talk about free speech on this or any public university, we need to be mindful of the law.”

But that doesn’t mean hateful speech gets a pass. Campuses have a legal obligation to protect free speech, but they also have a moral obligation to provide an inclusive environment. When faced with hate speech on campus, Chemerinsky said, the best response can be to exercise one’s own rights by denouncing hateful speech and actions, by organizing counter demonstrations, sit-ins, teach-ins and silent protests, or by distributing fliers at an event where someone is speaking.

“Words do matter, and one of the most important things (campus administrators) can do to validate students who would be upset by hateful speech is to strongly denounce it. The best remedy to speech we don’t like is more speech.

“The reality is that the only way in which we can bring about change in society is by speaking out against the things we disagree with. If we silence the people we don’t like today, they can silence us tomorrow.” 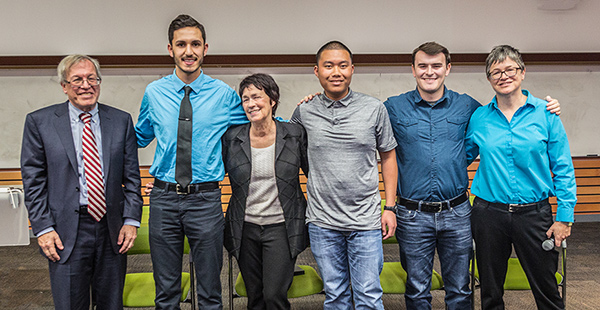 Chemerinsky, one of the nation’s leading experts on the First Amendment and Constitutional law, spent the day on campus discussing free speech issues and answering students’ questions. He spent time with pre-law students from lecturer Mark Harris’ classes, and his visit culminated with the afternoon lecture, which included questions from the audience and a panel of students.

The majority of students who asked questions and participated in the day’s events expressed their support for free speech, including the three undergraduate student panelists: Harrison Duran, Jason Matthew Miguel and Kamyar Nekoui.

The best remedy to speech we don’t like is more speech.

Harrison Duran, president of the College Republicans, was one of the panelists. Duran, whose group has invited controversial conservative commentator Ben Shapiro to UC Merced, acknowledged that free speech can be a polarizing topic. After the lecture, he said his group hopes to make the Shapiro appearance an inclusive event.

“Anyone can come and ask a question,” Duran said. “The main goal of bringing him is to establish a forum. Everyone in our group doesn’t agree with him. People who are interested are invited to attend, even those who disagree with his views.”

First-year student Ahmed Elhanafy shared his own personal experiences during the early afternoon meeting with students. Despite being harassed due to his Egyptian heritage, he believes “all speech should be allowed regardless of the content.”

The Chancellor’s Dialogue brings leading scholars to campus to discuss pressing issues confronting higher education today through a series of conversations and public lectures. Speakers in the series have made lasting contributions to their fields of study and our understandings of interdisciplinary research, and have demonstrated a commitment to broadening opportunities for participation in sciences, engineering, humanities and the arts.